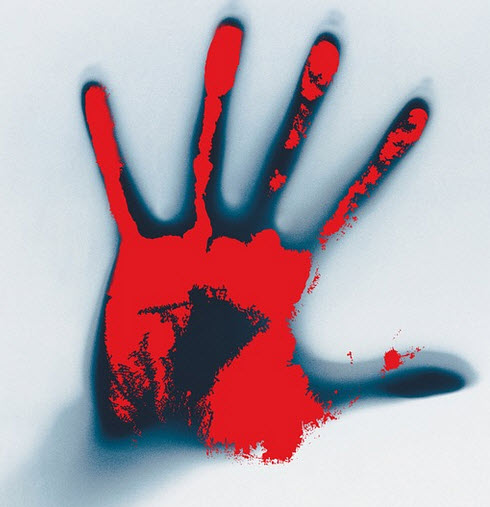 Now you know this one is not going to end well don’t you.

My dad is an amazing engineer and loves nothing more than pottering in his shed making things such as extremely elaborate birdhouses, tables, cabinets…oh yes, and his own power tools.  His thinking is pretty much  “why spend good money on a drill when I can just adapt a hair drier and make one myself.”

One of his more impressive creation was a circular saw – a metal table with a slot in the middle for the blade to poke through; an adjustable guide to help cut straight and a motor (probably from a lawnmower) bolted underneath to turn the circular blade at an incredible rate.  It was an amazingly loud, ridiculously powerful and very effective piece of kit but there were 2 important things that he forgotten.

The first was to include any form of safety guard on the machine and the second, more important thing was that you never, EVER lend something like this to me.

The saw had been in my garage for a while, since my dad had brought it over to help with some floor laying project.  It had been a God-send that weekend, cutting planks of wood in a just a few noisy seconds and now it could help me again.

I was home alone and decided it was the perfect time to sort out an issue I had with one of our door frames. Did I have a large plank of wood to cut…no, I had a small piece of wood about the length of my finger that I  needed to trim about half a cm off so I could glue it into the door jamb.  After two botched attempts at cutting a thin strip off the wood with a hand saw I suddenly had a moment of inspiration…that machine my dad gave me can cut very straight lines in wood in seconds!

Plug it in, adjust the cutter guide, turn it on…ready to go.

When you lay a large plank of wood on the saw you have to slowly push it along into the blade and so that is what I did with my tiny piece of wood.  The result was almost the same – apart from the fact that as soon as the blade touched this block of wood it snatched it out of my hand and flung it at an impressive rate across the garage.  Oh yes, and it dragged my fingers into the blade.

Shit, shit, shit, shit, shit…I remember clearly those being the rather unimaginative words I repeated to myself as I looked in horror at the mangled mess that was once the top of my index finder.  In the millisecond my hand had whipped past the blade it had pretty much cut half my finger off across the nail and was now peeing out a worryingly impressive amount of blood.

I obviously needed to go to casualty pretty quickly and thankfully I live only a mile away from the nearest hospital (it was one of the things that attracted me to the house when we bought it). The next minute can be best summed up by my thought process.

“OK, how do I drive with so much blood running down my arm?”

“God, I wish Kirsty was here and hadn’t left me looking after….”

“How do I get my daughter out of bed and drive my car one handed to hospital with her on my lap whilst bleeding everywhere?”

I’d reached my “How do I” limit by this point and found myself standing on my neighbour’s doorstep , dripping blood everywhere and praying to God someone was in.  Paul my neighbour opened the door, at which point I held up my mangled digit and as casually as possible said “Erm, can you take me hospital please…oh and can Tina (his wife) babysit for a while.”

They both sprang into action (thanks again by the way); wrapping my hand in a rather nice Egyptian cotton towel (sorry about ruining that by the way) before whisking me off to hospital.

Eventually my finger was operated on; it’s only slightly shorter than the other now and I’m sure the nerve damage will eventually sort itself out.  My dad came and took the saw away soon afterwards.

That's me by the way!